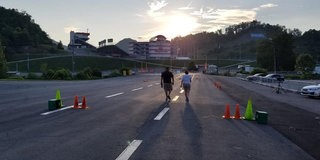 For the second year in a row, the Tire Rack SCCA® Match and Championship Tours stopped in Bristol, Tennessee for four days of autocross. This year, the Match Tour kicked off the weekend. Thursday was full of class competition and Friday was scheduled to be Challenge qualifying and competition. As the qualifying sessions wrapped up, the skies opened and a lightning delay forced the Challenges to be cancelled.

Thursday morning, Street Touring Hatch included six drivers representing three different manufacturers. In the morning, Alex Piehl set the pace in his Subaru WRX to lead Brian Flanagan in the Volkswagen GTI by a mere .108 second. In the afternoon, both drivers improved, but it was Piehl taking the win by just 0.432 second.

In A Street, the Chevrolet party made up of Corvettes and Camaros was broken up by the lone Lotus Elise of Bryan Carbon. The interloper led by 0.748 seconds on the merits of a strong third run after the morning with Cody Hunt in second and Bill Bostic in third. The afternoon shook things up as John Wolf found over a second and jumped into second place, just over a second behind Carbon. Bostic hung onto third as Jason Ruggles climbed to fourth for the final trophy position. Hunt finished in fifth, just out of the prizes.

Sam Strano debuted his new C7 Corvette Grand Sport in Super Street R this weekend. In the morning, Josh Luster set the pace, with about a half-second lead over Strano heading into the afternoon. The afternoon brought speed for Strano, but his improvement wasn’t quite enough as Luster claimed victory by a margin of 0.198 second. Grant Reeve and Laurence Casey claimed the remaining trophies in the 12-driver class.

This is the second National Solo® event of the season we’ve seen Jennifer (Vance) McBride at, following a short hiatus since 2016. She’s quickly regained her fast pace, slotting into second place after morning runs in C Street Ladies, behind co-driver Maria Mayorga. In the afternoon, it was McBride and Tara Johns finding the time as they jumped to first and second respectively to take the trophies, separated by just 0.072 second.

CAM Sport was filled with the usual Chevrolet Corvettes, but also a pair of Saturn Sky Redlines. Jeff Dobbins led out of the gate in his Corvette, taking a 0.339-second lead into the afternoon over Eric Brown. In the afternoon, Jarrod Hix set the fastest time of the session in his Sky to jump into second place, 0.323 second behind Dobbins. Brown held onto the final trophy in third.

Full results from the 2018 Tire Rack Bristol Match Tour can be found here.